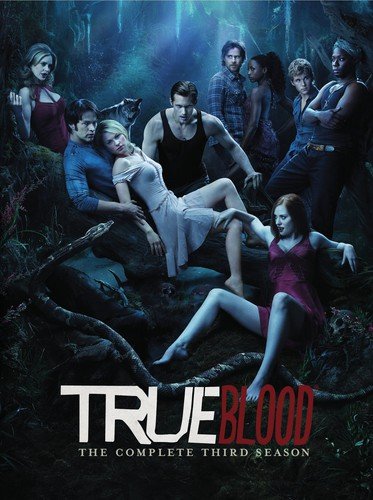 In Bon Temps, everyone has something to hide. But when new threats emerge, no one can conceal the secrets of their past. After Sookie discovers Bill was kidnapped, she heads to Mississippi, where she becomes entangled in a world ruled by werewolves and a powerful Vampire King. Eric is also drawn to the Kingâs domain to settle an old score; Jason falls for a mysterious woman; Lafayette canât avoid love or demons; and Sam uncovers the truth about his birth family. It all leads up to the revelation of the seriesâ¦Sookieâs true identity.

The 12 episodes composing True Blood: The Complete Third Season are either the best yet or the most ridiculous, depending on one's opinion of the increasing number of monsters entering the scene. As last season saw an onslaught of pagan and ancient Greek-derived "supernaturals," as they're called by Bon Temps' citizens, this season welcomes everything from werewolves, to vampire royalty, to that surprise-being that Sookie Stackhouse (Anna Paquin) finally discovers she shares genes with. While the first two seasons centered on the spicy love affair between Sookie and Bill Compton (Stephen Moyer), this season branches out once again from the vampire-human cultural blender. From the first episode, "Bad Blood," when Bill is whisked off to meet the King of Mississippi, Russell Edgington (Denis O'Hare), whose villainous scheme will inform all ensuing episodes, one gets less of Sookie and Bill, and more of everything else.

For example, Sam Merlotte (Sam Trammell) reveals himself this time around, starting in the episodes "Beautifully Broken" and "It Hurts Me Too," in which he tracks down members of his past and in turn meets some new family, like his mischievous brother, Tommy Mickens (Marshall Allman). Following up on Eggs's death at the end of season two, Andy Bellefleur (Chris Bauer) and Jason Stackhouse (Ryan Kwanten) have multiple police dramas, especially in later episodes like "I Smell a Rat" and "Fresh Blood." This season, too, presents some of life's greatest challenges to Tara Thornton (Rutina Wesley), as if she hadn't suffered enough after her new love Eggs was shot. Hoyt (Jim Parrack) and Jessica (Deborah Ann Woll), as a foil couple to Sookie and Bill's vampire-human coupling, have enormous hurdles to jump over simply to continue dating. While all of these dramas make the characters in Bon Temps come alive like never before, the silliest of the plots continues on, unfortunately, as Queen Sophie-Anne Leclerq (Evan Rachel Wood) has to battle King Edgington for Vamp-Blood sales territory. On the up side of that chess-game narrative, Eric Northman (Alexander Skarsgård) and his femme fatale, Pam De Beaufort (Kristin Bauer), play much larger roles this season, and in the finale, "Evil Is Going On," Eric not only discovers his deep past history but struggles through his rockiest present dangers thus far.

Interestingly, though Sookie is still the protagonist, True Blood appears to be shifting to a wider view, emphasizing the overall community and the effects supernatural warfare has on Bon Temps collectively. Lafayette Reynolds (Nelsan Ellis), still one of the most charming characters, discovers more about his past, thanks to nurse Jesus Velasquez (Kevin Alejandro), and Jason too discovers a new calling, thanks to Crystal Norris (Lindsay Pulsipher). If anything, this season of past recollections and the realizations of future callings will allow for this excellent series to carry on into infinity, as magical creatures continue to grace this setting enriched with full-fledged characters. Vampires were, as the cast confirms this time around, only the beginning. --Trinie Dalton

Shining a spotlight on dementia research this September

See how our science is tackling dementia

The Dementia UK Ecosystem (DUKE) brings together leaders from the UK DRI, Dementias Platform UK, the National Institute for Health Research, the pharmaceutical industry, and funders to create a cohesive community, coordinating efforts to accelerate progress in tackling dementia.

Produced by a cross-party group of MPs and Peers in collaboration with Alzheimer’s Society, the 'Fuelling the Moonshot' report is the culmination of a detailed inquiry run by the All-Party Parliamentary Group (APPG) on Dementia, which received evidence from experts and organisations in the field of dementia research. The report makes a case for how the Government’s promised ‘Dementia Moonshot’ funding should be spent to best support research into dementia and neurodegeneration.

Prof Sir David Klenerman, UK DRI Group Leader at Cambridge, and Prof Sir Shankar Balasubramanian have been awarded the 2022 Breakthrough Prize for their development of Next Generation Sequencing. The groundbreaking technology significantly reduced the time and cost associated with sequencing a human genome, revolutionising modern research and medicine.

We accelerate, innovate, deepen and broaden discovery science in dementia, with the goal of filling the huge knowledge gap in this field. We exist to bring forward the day when research benefits people living with and those at risk of dementia.

We have a clearly defined vision at the UK DRI to develop effective therapeutics, diagnostics and technologies for people living with dementia. Alongside building our disease knowledge over the coming years, we will also make progress in translating these discoveries into the clinic.

We study a range of neurodegenerative disorders that cause dementia. Many of them share fundamental disease mechanisms and characteristics, and greater understanding gained in one can often benefit others. To ensure we capitalise on diverse expertise, approaches and perspectives, we have established cross-centre themes.

Our efforts to increase the diversity of our team, ensure inclusion and promote equality of opportunity, align with our vision for the UK DRI’s Institute culture and identity as a world-leader in dementia research.